Magnetic resonance imaging is sensitive to motion. Just like with other images, movement may cause blurring and distortion (‘artefacts’). To counteract this, motion correction methods are often used. These include devices that track motion as well as software that can correct some of the artefacts after the images have been collected. We have just published a paper on a potential new way to do this, using a wireless accelerometer (link, open access [1]), so here is a quick blog post about motion and MRI, explaining some of our findings along the way. 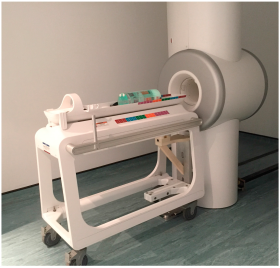 One of the reasons for doing this work is that we are using a new scanner for newborn babies. Motion is always an issue in MRI, even for adults, but the scanning of newborns may be particularly vulnerable. It is not always easy to convince a newborn baby to remain still. Newborns may move several centimetres where adults only shift a few millimetres. As the newborn is smaller in size, this movement also has greater impact in that it can completely displace the (much smaller) structure of interest. Newborn babies also show differences in physiology compared to adults, which can affect the scan. For example, they breathe faster and less regular, and the resulting motion is transmitted to the head to a greater degree (due to the smaller distance between head and chest) [2].

Types of motion
Motion comes in many types. There is microscopic motion, related to for example circulation of blood or water diffusion, and there is macroscopic motion, related to whole-body movement and physiological functions, for example breathing movement. It may be periodic (e.g. breathing movement), intermittent (e.g. yawns, hiccups) or continuous (e.g. general unsettledness, scanner vibrations). In research settings, noise and motion may be induced by experimental procedures [3]. Motion causes artefacts such as blurring, signal loss, loss of contrast and even the replication of signal in wrong places (‘ghosting’) – all lowering the quality of the image. An example of a motion artefact can be seen in the image below.

In the figure above, there are lines on the right-hand scan (red arrow), which are distortions. These distortions were created because the head rotated slightly whilst it was being scanned. Too much distortion and the image will become less useful for clinical and experimental purposes.

Types of motion correction
There are many types of MRI motion correction. The simplest may often be to prevent and minimise movement using coaching of the patient, sedation and fast and/or motion-resistant imaging protocols. A fast scan with a still individual will usually give very little motion. However, this may not always be possible. Patients do not always lie still, sedation may not always be a good idea, and even our best imaging sequences can be vulnerable to movement to some extent. Large movement is therefore often best tackled through different means: it is detected and corrected for. Correction can be done during the scan (real-time) or after the scan (creation of the image from the raw data and/or post-processing of the image).

There are limits to this type of large movement correction. For example, we can use so-called navigator pulses during the scan to correct for movement in real time, but they tend to make scans take much longer. We can also use tracking devices to correct for motion both during and after a scan, but such devices are limited by the level of motion they can detect and require a fair bit of extra equipment to work inside or interact with the scanner. Finally, we can correct for motion in reconstruction or post-processing, but this too usually takes a lot of time and effort. Which type(s) of correction method is best may differ between different types of scan, patients, and experimental protocols and so on.

In our paper, we used an external motion measuring device – a wireless accelerometer, similar to one that you may buy for fitness purposes – to measure motion of the head. The nice thing about this is that it can give us full real-time 3D motion information about how the head moves. It is not like a visual device, which needs a clear line of sight to be able to ‘observe’ the head at all times. The accelerometer gave us continuous, wireless feedback on the angle of the object being scanned. We could then use this information to adjust the MR data, using a motion correction algorithm. The algorithm, using movement data from the accelerometer, adjusted how the MR signal was recorded at each given time point. We were in short using the signal from the accelerometer to shift k-space.

This meant that shifts in signal due to movement could in theory be recorded and, at least partly, fixed. Conversely, it also meant that motion could be introduced in a motion-free image. To introduce motion, we first made a motion data file with the accelerometer, simply by manually rotating it and recording the angles. We then applied this motion data file to the raw data of a motion-free scan. The motion file was used to shift signal in k-space for each affected phase encode step. Doing this, we could distort the image in the same way that real motion would cause distortions, despite there being no original motion in the MR data. We could ramp this up as we pleased, adding more and more ‘motion’, as shown in the figure below. 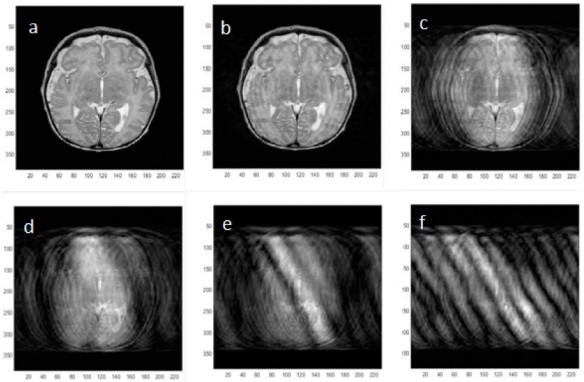 In principle, reversal of the motion effects should be possible. The motion in the figure above was introduced using a standard rotation matrix which multiplied the k-space locations by the measured angle, and if we reverse this process (i.e. counter-rotate the k-space data according to the measured angles), removing the noise should be possible. As with most things, it is easier to break than fix, yet we did see a subtle reversal of motion artefacts for a simple side-to-side rotation. This means that a wireless accelerometer may eventually be used to retrospectively correct for motion in neonatal MRI scans. It is also possible that it could be used for guiding real-time correction methods.

We’ve recently published a paper titled “Electroencephalographic Response to Sodium Nitrite May Predict Delayed Cerebral Ischemia After Severe Subarachnoid Hemorrhage” on how electroencephalography (EEG for short) can be used to figure out which patients with a certain type of stroke (subarachnoid hemorrhage) will develop a complication after the initial brain bleed and which will not.

Subarachnoid hemorrhage is a type of stroke that can happen at any age. It is a bleed on the surface of the brain, in a space between the arachnoid membrane and the pia mater surrounding the brain (see figure below).

The bleed is usually caused by an aneurysm (a bulging, weak section of a blood vessel) bursting, causing blood to escape into the subarachnoid space. Here, it puts pressure on the brain tissue (causing tissue damage) which can also reduce blood flow to other parts of the brain (causing lack of oxygen and cell death). The released blood may be toxic to the brain tissue and could cause inflammation. At worst, a subarachnoid hemorrhage results in death or severe brain damage.

Some of the damage is caused directly by the bleed (e.g. the pressure on the brain), and some is caused by how the bleed disrupts the normal control of blood flow in the brain. In particular, it is bad when the nitric oxide pathway stops functioning properly. Nitric oxide helps preserve the circulation in small blood vessels in the brain, partly through enlarging the blood vessels (vasodilation) and lowering the gathering of blood-clot forming platelets. After a bleed, nitric oxide levels in the brain are often reduced. This could be because hemoglobin in the blood stops enzymes responsible for producing nitric oxide from working properly. Another contributing factor is that the nitric oxide that is already present in the brain reacts with superoxide (part of the immune response) which leads to the levels of nitric oxide being even further lowered.

Nitric oxide disruption appears to be involved in delayed cerebral ischemia, which is the most common complication after a subarachnoid hemorrhage. For example, people with genetically lower activity in an enzyme that produces nitric oxide have a higher risk of this complication. Delayed cerebral ischemia is the unpredictable lack of oxygen to the brain leading to severe, even fatal, brain damage. This typically happens 3-14 days after the initial subarachnoid hemorrhage.

Which brings us to our question:

Patients who have the same clinical severity, no measurable genetic differences in nitric oxide production, and who seem exactly the same can go on to show very different outcomes. One can develop ischemia and suffer devastating new brain injuries, and the other return to normal without complications. How can we tell who will get it and who will not?

EEG measures neuronal (electrical) activity using electrodes placed on your scalp. It picks up fluctuations in voltage from the electric currents in the neurons, and in the clinical setting it is used to measure the spontaneous electrical activity in a brain over time. Different parts of the brain generate different signals. Some parts show signal with low frequencies (long waves, delta and theta frequencies) and some with short frequencies (rapid waves, alpha frequencies). The signal is linked to blood flow. In subarachnoid hemorrhage, it can be used to see cerebral ischemia develop naturally at an early stage, because as the blood flow is reduced, short frequencies begin to fade and long frequencies steadily increase. In short, the ratio of alpha to delta (for example), will be reduced in the ischemic patients. However, it can take several days of recording to get a result with this method. It is possible, but not practical.

EEG spectrograms from a patient that did not develop delayed cerebral ischemia, and one who did, plus a scatter plot with the group differences in spectrogram ratio (alpha delta ratio (ADR))

So we have not only shown how the nitric oxide pathway is important in the development of delayed cerebral ischemia, but this also means we now quite possibly may be able to relatively quickly determine who is at risk for this life-threatening complication, and who is not.

Revisiting brain regions, courtesy  of Pinky and the Brain.

(Incidentally, I named my first neuroscience review paper “Dyspnoea and the Brain” partly in honour of this comic, fully expecting the title to be dismissed by colleagues and journal alike. It wasn’t. Nobody has spotted the connection yet, sadly.)