I get to do all sorts of practical stuff at work, some of which has nothing to do with physiology or imaging. One such thing is producing custom-made cables and plugs. Since I’ve had the pleasure of doing a fair few of these recently, I thought I’d put up a short how-to blog post on wiring up a DIN connector.

DIN stands for Deutsches Institut fur Normung, which translates to the German Institute for Standardisation. A DIN connector is, in short, a standardized connector, which come in a similar size. You may have seen them as they are often used for analog audio. The male DIN plug is typically 13.2 mm in diameter, and it often has a notch at the bottom to make sure the plug goes in the right way. Male plugs have a set of round pins, 1.45mm in diameter, that are equally spaced within the plug. The different types of DIN plugs have different numbers and configurations of pins. Below is an overview of some typical pin configurations. 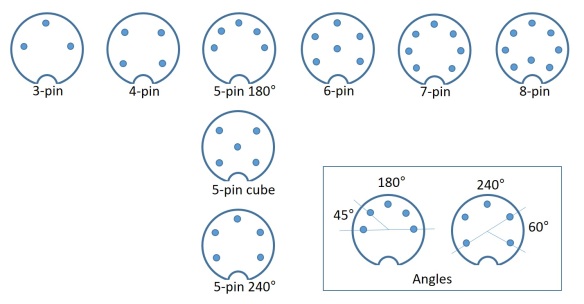 There are, of course, variations over these themes, as well as specialized plugs with more than 10 pins. Pins on male connectors are numbered. The numbering* goes from right to left, viewed from the outside of the connector with the pins upward and facing the viewer. The female counterparts are the inverse of the male plugs, and their numbering is from left to right. Usually, only corresponding male-female pairs work together, but you may be able to fit a 3-pin plug with a 5-pin 180 degree plug.

*EDIT: to clarify, the numbering of the pins are not in order, as pointed out in the comments (thank you!). For the plugs, a 5-pin plug would be numbered (from right to left for the male, and from left to right for the female): 1–4–2–5–3.

So how to attach a DIN plug to a cable?

2 thoughts on “The wiring of DIN plugs”